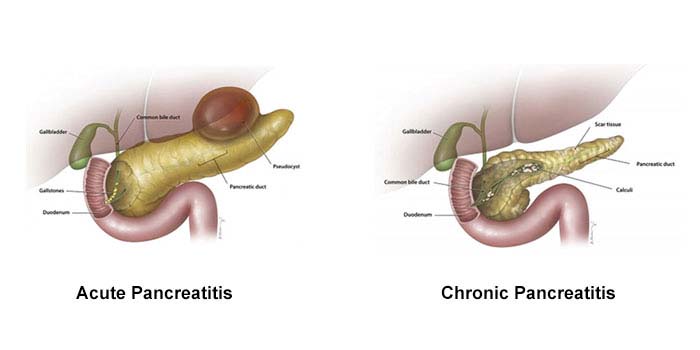 Pancreatitis is inflammation of the pancreas that occurs when pancreatic enzyme secretions build up and begin to digest the organ itself. It can occur as acute, painful attacks lasting a matter of days, or it may be a chronic, condition that progresses over a period of years.

Chronic pancreatitis refers to ongoing disease in which the pancreas continues to sustain damage and lose function over time. The majority of cases of chronic pancreatitis result from ongoing alcohol abuse, but some cases are hereditary or due to diseases such as cystic fibrosis.

What are the Symptoms of Pancreatitis?

Symptoms of Acute pancreatitis include:

Symptoms may develop over a period of time without the sudden dramatic occurrence of an acute attack. However, those with undiagnosed chronic pancreatitis may develop acute episodes. In chronic pancreatitis, there is a decrease in the secretion of enzymes needed for digestion and absorption of dietary fats. Fat digestion is impaired, resulting in fatty stools. This is called exocrine insufficiency. Recurrent abdominal pain may be accompanied by nausea and weight loss. Diagnostic scans may find stones or areas of calcified tissue within the pancreas.

Symptoms of chronic pancreatitis include:

In approximately 5-6% of patients with chronic pancreatitis, the disease is caused by autoimmune inflammation (in which the immune system attacks the pancreas)¹. Symptoms may be mild, but patients with autoimmune pancreatitits (AIP) tend to show elevated levels of immunoglobulin G4 (IgG4) and a high rate of pancreatic stone formation. Other indicators of autoimmune pancreatitis include narrowing of the main pancreatic duct, scarring of the pancreatic tissue, and infiltration with inflammatory cells. AIP can occur by itself or in association with other autoimmune diseases such as primary sclerosing cholangitis (PSC), primary biliary cirrhosis, retroperitoneal fibrosis, rheumatoid arthritis, sarcoidosis, and Sjogren's syndrome.

Treatment for acute pancreatitis may include nutritional support with feeding tubes or intravenous (IV) nutrition, antibiotics, and pain medications. Surgery is sometimes needed to treat complications. Treatment for chronic pancreatitis may involve IV fluids; pain medication; a low-fat, nutritious diet; and enzyme supplements. Surgery may be necessary to remove part or all of the pancreas.

To allow the pancreas to recover and to prevent damage and irritation, patients with pancreatitis may need to temporarily receive intravenous fluids for hydration. If you are unable to eat for more than 5-7 days, or if you are malnourished, you may begin enteral nutrition via a small tube placed through the nose. This will deliver nutrition formula to your stomach or small intestines. Sometimes enteral nutrition is contraindicated or not tolerated. Under these circumstances, parenteral (intravenous) nutrition is indicated, and is better than no nutrition.

It may be necessary to open the blocked bile or pancreatic duct using a stent, which is a small plastic or metal tube placed within the duct to keep it open.

Endoscopic retrograde cholangiopancreatography (ERCP) is a procedure that combines upper gastrointestinal (GI) endoscopy and x rays to diagnose and treat pancreatitis and other problems of the pancreatic ducts. ERCP may be performed if a person's bile or pancreatic ducts are suspected of being narrowed or blocked due to pancreatitis or other causes.

During ERCP, a flexible, lighted endoscope is inserted into the esophagus, through the stomach, and into the duodenum (the first part of the small intestine). Contrast dye is injected into the ducts, and x-ray video (fluoroscopy) allows physicians to see any areas of narrowed or blocked flow from the bile duct or pancreatic ducts. If a problem is found, the physicians can then insert special tools through the endoscope to open blocked ducts, break up or remove gallstones, remove tumors in the ducts, or insert stents to restore the flow of pancreatic or bile fluid. A biopsy may also be taken through the endoscope, in order to evaluate cells for infection or cancer.

If gallstones are the cause of pancreatitis, they may be removed during ERCP, to be followed by removal of the gallbladder (called cholecystectomy).

The pancreas is normally stimulated to release pancreatic enzymes when there is undigested food in the intestine. These enzymes join with bile and begin breaking down food in the small intestine.

The Pancreas Center works to find the optimal pain management regimen that enables each patient to remain active and at home rather than in the hospital or unable to maintain normal levels of activity.

Many patients take a regimen of more than one kind of medication. Oral medications include narcotics such as Percocet and oxycodone, and these may be used in conjunction with non-narcotic medicines such as muscle relaxants and antidepressants. Oral methadone is a very good medication for managing chronic pain.

Once an oral regimen is established, acute flare-ups can be managed by temporarily adding medications. If oral medicines can't be tolerated, patients may need to be admitted to the hospital for intravenous medications. Nerve blocks may be used to manage pain for several months at a time: nerve blocks entail the insertion of a needle through the skin in the back to block the signals of the main nerves going to the pancreas. This procedure can also be done endoscopically, in which the bundle of nerves to the pancreas is injected with long-acting pain medication that lasts several months. This is performed using an endoscope through the stomach. Nerve blocks destroy the nerves, but in time they grow back so patients need repeated treatments.