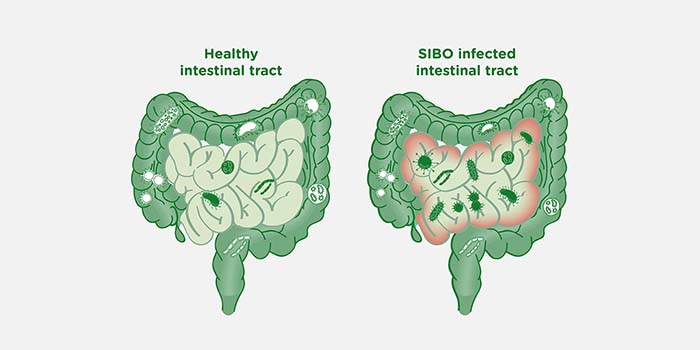 What is small intestine bacterial overgrowth?

Signs and symptoms of SIBO include:

SIBO shares many symptoms with IBS, including bloating, abdominal pain, diarrhea, and constipation. Though the exact relationship between SIBO and IBS is unknown, many doctors believe that SIBO is the root cause of IBS for a subset of patients.

Though this may sound confusing, keep in mind that IBS is a collection of symptoms that can result from many different factors. Doctors often arrive at a diagnosis of IBS after ruling out other conditions, and there’s no definitive test for IBS.

If you’ve been diagnosed with IBS and haven’t responded to dietary changes, it’s possible that your symptoms result from bacterial overgrowth, and not from food sensitivities. If you have SIBO, a treatment approach that directly targets the bacteria in your small intestine may relieve some or all of your IBS symptoms.

How is SIBO diagnosed and treated?

If you have the symptoms of SIBO, the physician may perform a breath test. This is a noninvasive test that involves breathing into a tube before and after drinking a sugar solution. If you have SIBO, the excess bacteria may release hydrogen and methane, which are then detectable in your breath.

The primary treatment for SIBO is a course of antibiotics.The physician also look at potential underlying causes of your SIBO. Sometimes, SIBO results from another condition, such as gastroparesis or celiac disease, from structural problems with your digestive system, or from the side effects of medication.